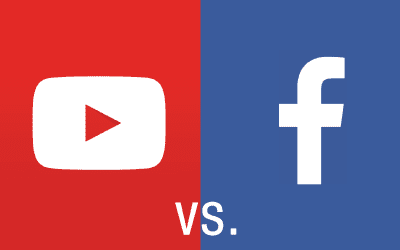 As two of our most popular platforms for finding your social media worth, YouTube and Facebook are robust, intricate websites that offer a variety of features.

Today we look at their origins, their functionalities, and how to best use them for posting both original and branded content.

The primary purposes of YouTube and Facebook as platforms vary significantly. Both were founded in a similar era of the internet, with Facebook coming into existence in 2004 for only college students and YouTube emerging in 2005 as an American-based, video-hosting platform. They now individually boast a user count of over one billion people and both sites compete for the number two and number three global spots for most internet traffic (with YouTube just climbing above Facebook this last April; Google claims the spot for number one most visited website both nationally and internationally). Google has been the parent company of YouTube ever since it acquired it in 2006. Despite its 11 years of existence consisting of several new features and revamps, YouTube’s primary functionality has not changed: it is a video-hosting platform. The platform has become so popular that it has materialized into an extremely powerful search engine. While Google has not released how many search results YouTube is processing currently, in 2013 the platform was processing more than 3 billion searches a month. Considering its rankings both in the US and globally, it is likely processing similar numbers today, making it one of the most popular search engines in the world.

In defining what YouTube is as a platform, the company is fairly succinct in stating its purpose:

Launched in May 2005, YouTube allows billions of people to discover, watch and share originally-created videos. YouTube provides a forum for people to connect, inform, and inspire others across the globe and acts as a distribution platform for original content creators and advertisers large and small.

With features that now may seem to overlap with YouTube, Facebook’s primary purpose is entirely different. Facebook is entirely a social network that focuses on connecting people. Sometimes these connections happen via video, but just as often occur with written status updates, photos, pages, and events. Unlike YouTube, its search is primarily focused on finding people or pages as opposed to the content posted there. While Facebook’s search has expanded over the years to include trending or popular topics as suggestions while you type, finding people and pages with your keyword is Facebook’s main purpose.

According to Facebook’s own page, their mission is to primarily connect people:

Founded in 2004, Facebook’s mission is to give people the power to share and make the world more open and connected. People use Facebook to stay connected with friends and family, to discover what’s going on in the world, and to share and express what matters to them.

Facebook has recently reaffirmed their mission with their news release concerning their changes to their News Feed algorithm.

What can the platforms do with your content? As of this writing, both YouTube’s and Facebook’s Terms of Service have the same licensing rights: a worldwide, non-exclusive, royalty-free, sub-licensable, and transferable license. Neither platform claims to own your content, but by posting your content on their platform, you give them the right to use it. Currently this usage amounts to allowing the platform to post your content to other places than your profile or channel (such as someone using the share button to share your video to their wall on Facebook, or to have your video pop up as a recommended link on YouTube).

There is worry by some members of the creator community that Facebook or YouTube will attempt to make advertisements from their original content. While their licensing does legally allow them to do so, your videos are overall less valuable than the goldmine of data you provide them. But as part of being a free service, both companies do have the rights to use your original content on their own services as they desire.

In the end, both companies want as many active users as possible posting and sharing content. Facebook makes it easier for original content creators to spread their videos with the sharing feature. With the click of one button, each share means a whole new audience for your content. Facebook Live has made it even easier to do so, as Candace ‘Chewbacca Mask Lady’ Payne found out. You can certainly still share videos from YouTube, but sharing videos involves linking it to another website, while Facebook’s sharing process is completely inclusive.
YouTube’s strength remains in its YouTube Partner Program, which allows creators on YouTube to earn money through advertisements on their page. Their program is non-exclusive, which allows content creators to post their videos wherever they please. While Facebook recently signed deals with some companies and celebrities to use Facebook Live, the majority of content creators belong in neither group. YouTube more easily allows creators to join their partner program. However, the news feed algorithm on Facebook suppresses organic reach significantly for pages. A study found that brand pages reaches about 6% of their audience as of February 2014, and Facebook’s recent announcements on emphasizing posts written and shared by friends show that their interests have not changed in 2016. Facebook’s algorithm puts pages after individual’s profiles in importance, so any branded content posted on pages has less of a chance to be seen organically.

But there is still hope for brands and creators looking to promote on Facebook. Facebook Live videos have an enormous boost in the News Feed while you are live streaming. Alongside this, the company also released some branded content guidelines earlier this year to officially support verified pages that are paid by brands. Previously verified pages were not allowed to host any sort of branded content. The branded content tagging feature only applies to those with verified, blue-checked pages; those without a verified page are not affected by this change.

YouTube has been supporting branded content for some years now. Their creator academy has a section dedicated to branded content and working alongside advertisers. Without an algorithm affecting the order of a viewer’s Subscriptions tab, someone who is subscribed to another YouTuber will not have any videos made by that viewer hidden from them. This allows much more organic reach than Facebook, and a greater likelihood for more video views based on follower count alone.

Unfortunately for YouTube, the inability to easily share videos amongst your friends on the video-hosting platform can make it more challenging to reach an audience beyond the subscriber-base. Some of this difficulty is alleviated by YouTube’s ‘recommended videos’ sections, which are based upon a user’s view history.

For marketers, there is still a trend to use social media websites such as Facebook for digital video campaigns. Business Insider found that while branded content is gaining popularity when it comes to advertising in digital videos, 65% of marketing executives voted social media platforms (such as Facebook) as one of their most important platforms for advertising. Video-hosting platforms such as YouTube only got 55% of the vote as one of the top choices for digital video campaigns. Which platform should you use to post content? It depends entirely on your goal and audience. YouTube may be more lucrative for creators looking to gain income from ads on the video, and Facebook may be more lucrative for creators looking for more shares and exposure. In many cases, there is no reason not to post on both of them. Posting on both platforms allows you to potentially reach more people and gain a greater audience for both yourself and the brand you are promoting.

As these websites continue to roll out different features and changes, pay rates and preferences are bound to change over time. One aspect is for certain, however: both Facebook and YouTube are very large players for both original and branded content, and both will likely continue to be so for a long time.